The Adventure Journey of the Slavic Epic

A breathtaking cycle of 20 canvases about the history of us, Slavic people, from prehistoric to modern times is "back home" in Moravský Krumlov. But it's been an adventurous journey. After all, even the author of the Slav Epic was not afraid of travelling!

The story of the Slav Epic

In 1910 Mucha returned from the USA to his native country where he rented a part of the Zbiroh castle to paint 20 canvases of the Slav Epic. He completed it in 1928 when he and his patron – who financed the work – Charles Crane presented it to Prague and the Czech nation as a gift. The paintings were stored in the chateau in Slatiňany during the Second World War. In the 1950s they were moved to the chateau in Moravský Krumlov.

For the first time, the first few finished paintings of the Epic were exhibited in the Klementinum in Prague in 1919. Chicago and New York exhibited 11 canvases a year later with huge visitor interest. In 1928 the whole set could be seen in the Prague Trade Fair Palace and in Brno after that.

Protracted disputes ensued, because the exhibition space was in a dismal state and did not benefit the work. For a few years, the cycle was exhibited at the Prague Trade Fair Palace and in 2017 people could see Mucha's Epic as far away as Tokyo. It was quite a success! Within three months, the exhibition was seen by an incredible 650 thousand visitors.

The legal dispute over the ownership of the work is still ongoing... but you can see all 20 originals of the Slav Epic again at the Moravský Krumlov chateau which simply prepared the perfect exhibition. 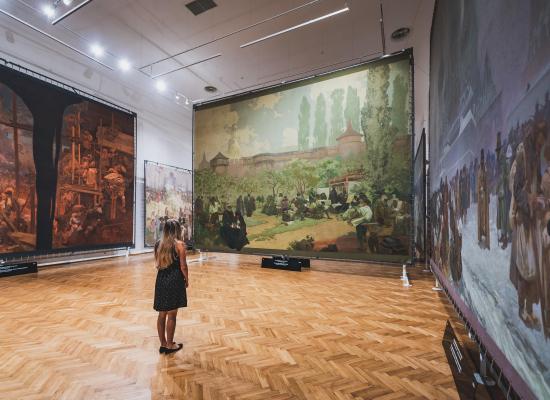 And now, when you know really everything about the Slav Epic, you'll want to see it for yourself, in the original and in dignified surroundings.

I want to see more